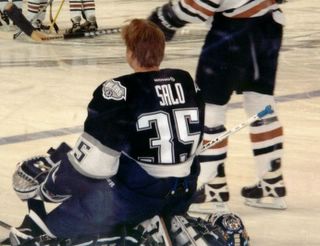 I found out today one of my favorite hockey players, Tommy Salo is retiring from professional hockey. Tommy is/was a great player and was one of the first guys I ever got to see play in person in 1999. A great goalie who was thoroughly underrated and one of the nicest guys I saw around the NHL and on the Edmonton Oilers. It was such a shame when he was dealt to Colorado and left the NHL at the end of last season to go play for MoDo in the Swedish Elite League.
So to Tommy, in honor of being a hell of a goalie and the first jersey I ever owned, I raise my glass in a toast!

And in special honor of Tommy, today’s blog post is dedicated solely to him :o)