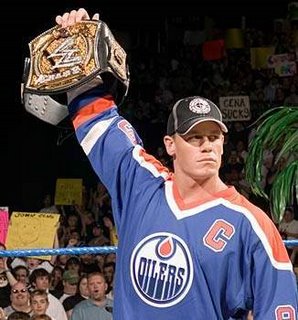 According to one of my best friend’s I’m thinking too much. And its probably true. I have a weird brain that doesn’t like to shut itself off. And you know something might be true when my dad starts mentioning things. Because he’s not quite the type too. And he’s been watching Dr. Phil (eeks) and talking about different accounts or bases in my life running low. I don’t know, I don’t pay much attention when my parents discuss DP. *g* I’m not one of his biggest fans.
But anyways, I’m thinking too much. And its showing in Sabrina *groan* Not good. Really not good.

I’m considering moving on to something else right now and just chucking Sab aside. Its been 6 months and frankly I’m damn tired of these people. So we’ll see what crops up to work on for awhile. Even my vice fanfic fails to interest me right now. Could go back and work on something else that’s been in the works for 6 yrs (sorry Shan!) but still iffy on it. I’m rewriting it from the start and trying to finish the original draft where I got myself into a corner. That’s the one that made me realize I need to block out everyone else’s suggestions but my own or the story can go (and WILL GO) totally off course.

Other then that, watched RAW last night. I loved Cena’s promo. And nearly fell off the couch when he said ‘some people out there want me to be more evil, more…and more sexual.” Let’s just say I’m a very happy camper I got that on tape *g*

Stars are playing tonight @ 6:30, against Columbus, should be an iffy game. I’m more into watching the Coyotes and Canucks this week. Coyotes because its the final week of the season for them and Cancucks because they’re trying desperately to get into playoffs.